October 28, 2019, marks four years without Sophia. Our lovely, smart, strong-willed, lively, cheerful, ambitious and beautiful daughter and sister.
It is unreal, incomprehensible, unacceptable and unbearable.
It is said that time heals all wounds. This is not true, not here, not for us. On the contrary, our wound only seems to hurt more, as time passes. And how else could it be with this deep wound caused by Sophia’s disappearance? A disappearance shrouded in mystery and surrounded by miles of question marks.

Four years of despair, fear and insecurity about what could have happened to Sophia.
Four years of struggle with authorities who won’t see, cannot see or simply refuse to see that there are other scenarios than ‘fatal accident’.
In Uganda authorities have seen this and steps are taken to conduct a new investigation.
Their Dutch colleagues appear to stubbornly stick to the convenient tunnel, leading to ‘fatal accident’. Thus structurally ignoring the various puzzling facts that seem to point in another direction. Efforts to get some cooperation yield little to nothing. Sometimes their door seems ajar but eventually it closes again. Just words, no action. It has been one disappointment after the other. Argumentation for the lack of willingness to investigate is never given. It seems as if Sophia does not matter. Needless to say how much extra pain that causes.

It is, and it remains, important to continue to seek attention for Sophia’s incomprehensible disappearance. In Uganda, in the Netherlands, everywhere. Never enough eyes and ears to see and hear this tragic story.

On October 28 this article was published in the online edition of the Ugandan weekly magazine the Independent:

The article also appeared in the paper version of the magazine (the text is identical). 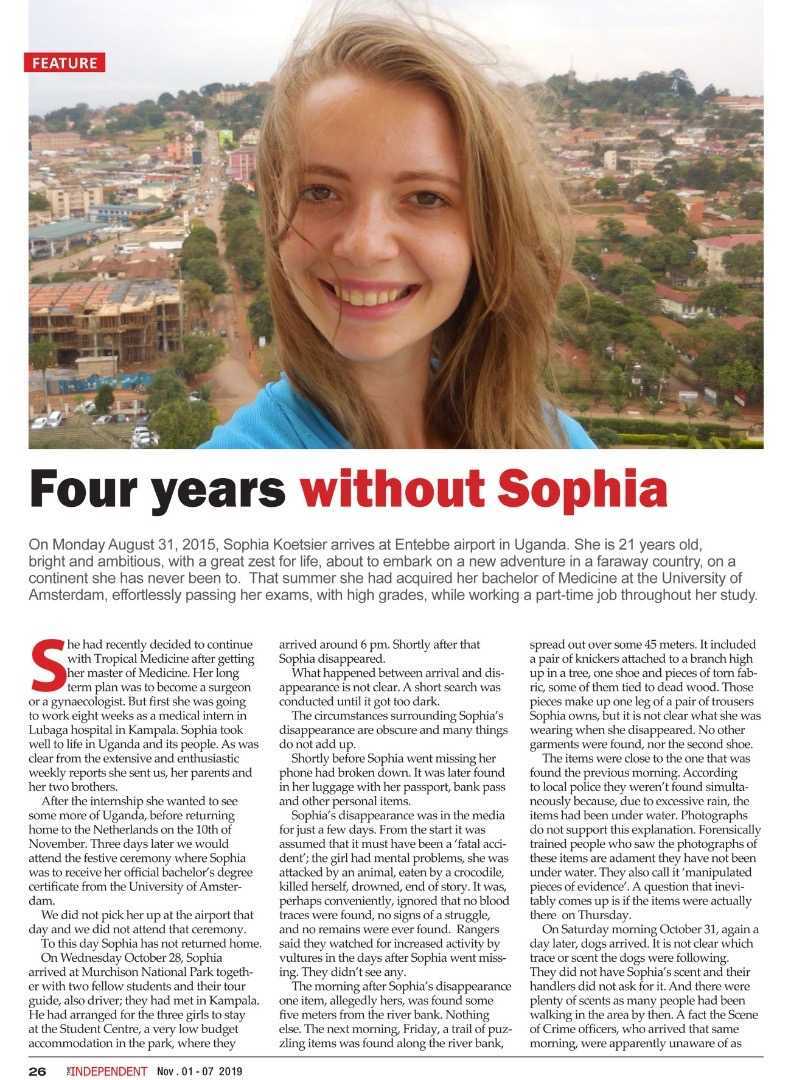 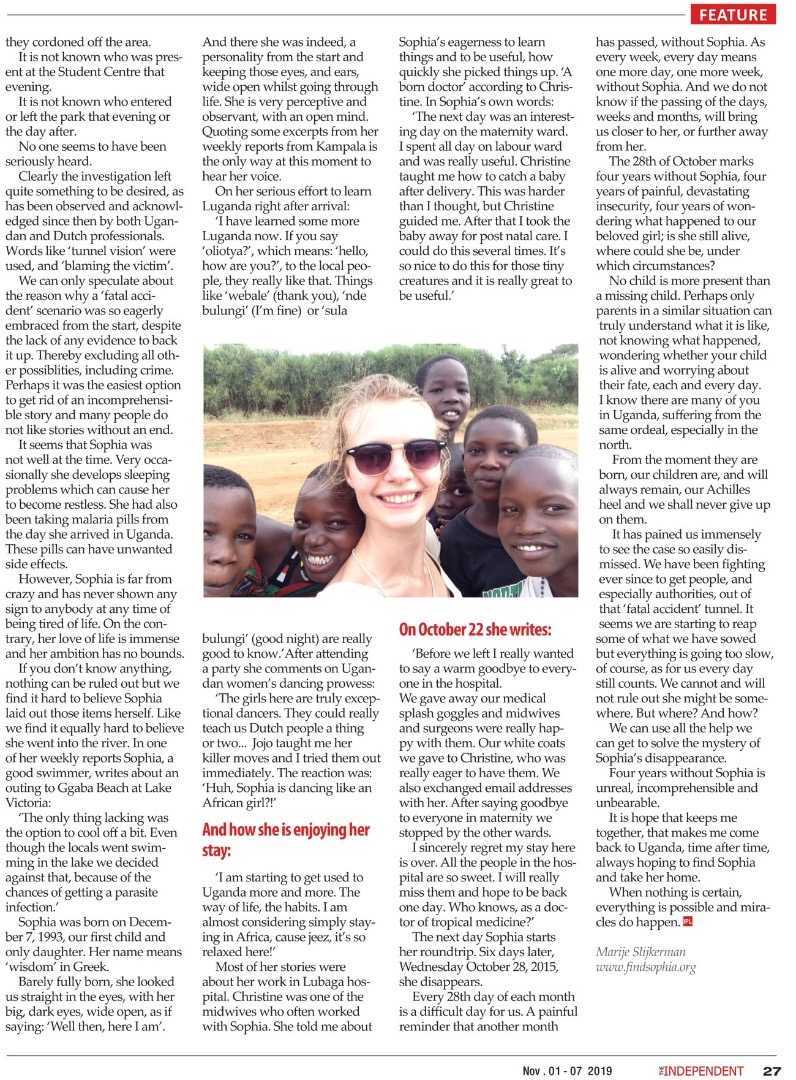 The best channels to reach people in rural Africa are the church and the radio. During my last journey to Uganda, in September, I have spent a lot of time in the area surrounding Murchison National Park, where Sophia was last seen. I have made contact with local church leaders and have spoken in various churches on Sunday mornings to ask the people to please come forward if they have any information. For several weeks there have been continuing announcements on the local radio. Posters and flyers have been distributed.
I had an article published in a widely read local weekly, ‘Rupiny’, which is published in the local language. The headline ‘Sophia tye kwene?’ means: ‘Where is Sophia?’ The text is a condensed version of the article that appeared in two English language national newspapers, late April. 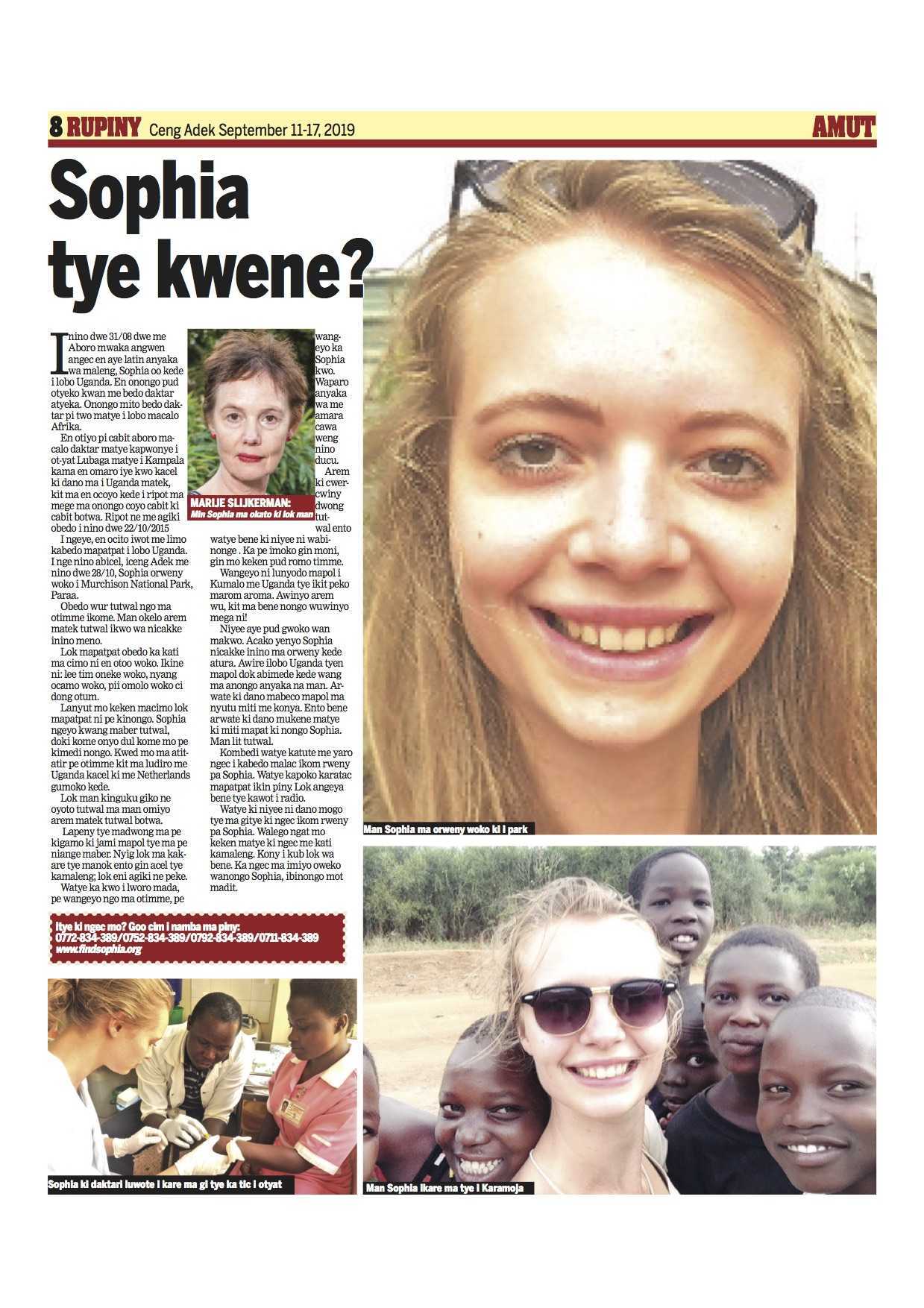 Regrettably, thus far these efforts have not lead to useful information.
Which does not necessarily mean that there are no people who might have more information. There can be all sorts of reasons why people won’t talk. Investigation is and remains of great importance.

Four years sounds like an eternity but it feels as if we took Sophia to the Amsterdam airport only yesterday.
Four years, it is hard to say how we made it through. Based on studies it is said that the sense of time is seriously disturbed in people who must live with the disappearance of a loved one. That seems right. I look back on four years of fog, a fog that shows no sign of lifting.
Four years in which we have maintained hope dat one day we will find the answers for what happened to Sophia, but above all, that Sophia will be home with us one day.
We are quite aware that it is possible that this day may never come, but that has never been our starting point. That fearful thought has never prevented us from doing all that’s humanly possible to find Sophia. As every parent will understand.
So we keep fighting for Sophia, we shall not abandon her. How could that even be possible? We miss her more than words can describe.
Four years in which good friends have always supported us and continue to do so. And they also keep repeating that, one day, all those efforts must lead to results.
Four years in which complete strangers have never stopped showing their support to us, in various shapes and forms. With kind and moving messages and with donations.
We are so very grateful to all of them and welcome any kind of help in our unwavering search for Sophia.

The online editor of the Independent has turned the text above into an article:

Social media
For those of you who are active on social media platforms and wish to share and follow, please do.
Due to problems with the old twitter and facebook accounts new accounts have been made.
Both are called Find Sophia Koetsier
www.twitter.com/findSophiaK
@findSophiaK en #findSophiaK
www.facebook.com/findSophiaK

PrevSophia’s disappearance on TV in Uganda
Sophia is 26 todayNext